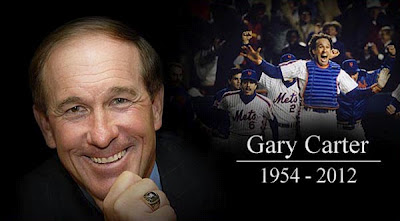 It's no secret that I'm a Mets fan. I have been since I witnessed one of the most exciting World Series back in 1986 when the Mets defeated the Red Sox. The 1986 Mets were a wild bunch of characters, but none have made me smile more than #8, Gary Carter. I was a bit too young to remember his first run with my Hometown Expos, but I was aware of the city's love affair with The Kid.

Known throughout his career for his hard hitting as well has his excellent defense behind the plate, Carter made a major contribution to the Mets' World Series championship in 1986, including a 12th-inning single against the Houston Astros that won Game 5 of the NLCS and a 10th-inning single against the Boston Red Sox to start the fabled comeback rally in Game 6 of the World Series. He is one of only three people ever to be named captain of the Mets and had his number retired by the Expos.

After retiring from baseball, Carter coached baseball at the college and minor-league level. He was inducted in the National Baseball Hall of Fame in 2003, and died on February 16, 2012 of brain cancer.