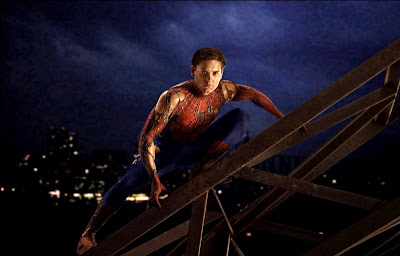 Sony Pictures plans to go another route with the Spider-Man series as they turn to James Vanderbilt for a new script for Spider-Man 4.

Here is the article from Associated Press:

Tobey Maguire's web-slinging days are behind him.

The 34-year-old actor and "Spider-Man" director Sam Raimi will not be returning to the superhero franchise next year. Instead, Sony Pictures and Marvel Studios announced Monday that a new "Spider-Man" film based on a script by James Vanderbilt that focuses on Peter Parker in high school would debut in the summer of 2012 with a new cast and filmmaking team.

"I am so proud of what we accomplished with the 'Spider-Man' franchise over the last decade," Maguire said in a statement Monday. "Beyond the films themselves, I have formed some deep and lasting friendships. I am excited to see the next chapter unfold in this incredible story."

The announcement of a reboot comes after reports that "Spider-Man 4" production stalled amid script revisions. The original "Spider-Man 4" release date seemed unlikely last week when Paramount Pictures announced that "Thor," another big-screen Marvel superhero adaptation, had hammered out the same May 6, 2011, release date as the fourth Spidey installment.

"Working on the 'Spider-Man' movies was the experience of a lifetime for me," Raimi, who directed all three "Spider-Man" films, also said in a statement Monday. "While we were looking forward to doing a fourth one together, the studio and Marvel have a unique opportunity to take the franchise in a new direction, and I know they will do a terrific job."

Maguire said in an interview last week that there was "great stuff in terms of story and script" for the fourth chapter and the plan was to still release the film in 2011. He also said he had specific ideas about the evolution of the character on the big screen.

"Thor" experienced its own upheaval over the weekend. Stuart Townsend departed the adaptation because of creative differences, according to two AP sources close to the production. Townsend, who had been cast as an ally of the Norse god, was replaced by Joshua Dallas.

The three "Spider-Man" films continually snared moviegoers, earning over $1.1 billion combined. After glowing reaction to the first two films, critical response to "Spider-Man 3" was so-so. Raimi said he was undecided about returning to the franchise after the third movie but later said he didn't like thinking about somebody else making the Peter Parker story.

Sony said it would have more news about the next "Spider-Man" movie in coming weeks.
Posted by psychology at 10:22 PM