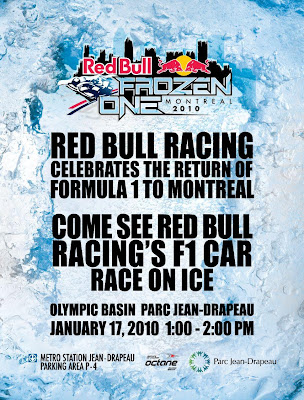 Scuderia Toro Rosso driver Sébastien Buemi will demonstrate his incredible skills and drive this specifically adapted car at Parc Jean-Drapeau located in the Olympic Basin behind the Circuit Gilles Villeneuve. To help celebrate the return of F1 to the city of Montreal, a 4-kilometer track will be laid out on the ice made up of turns, straight-aways, and open areas. You don't want to miss this!

Sébastien Buemi was the only rookie driver at the beginning of the 2009 F1 season, impressively scoring two points on his debut. As a youngster he won multiple Swiss go-kart titles, becoming European Junior Champion in 2002. He followed that with success in German Formula BMW and, as a member of the Red Bull Junior Team, the Formula Three Euroseries and GP2. In the latter he enjoyed multiple podium finishes and three victories, before being elevated to F1. With one full season of F1 under his belt, Sebastien is looking to build on that experience in 2010 and as a French speaker, is particularly looking forward to the Canadian GP in Montreal.