The Hawk Heads To Cooperstown 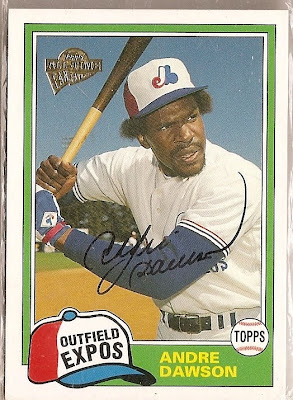 The 1977 National League rookie of the year, Andre Dawson, has officially been voted into the Baseball Hall Of Fame. Nicknamed The Hawk, Andre Dawson, was the only player this year to receive enough votes to head to Cooperstown. 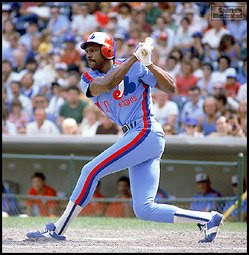 Watching Andre Dawson & his rifle of an arm was one of my childhood higlights, as I remember watching him, Tim Raines & other Expo greats at the Olympic Stadium.
Congrats to The Hawk!!

Here is the AP news release:
Andre Dawson was elected to the Hall of Fame on Wednesday in his ninth try, while Bert Blyleven and Roberto Alomar fell just short of earning baseball's highest honor.

Dawson received 420 of 539 votes in results announced by the Baseball Writers' Association of America, 15 more than the 75 percent necessary to gain election. The eight-time All-Star outfielder had fallen 44 votes short last year.

"If you're a Hall of Famer, eventually you're going to get in no matter how long it takes," Dawson said during a telephone conference call. "The wait isn't a big factor in the scheme of things. You get frustrated when, you know, people continue to say, `Well, when do you think you're going to get in?' And you don't really have the answer to that.

"As I sit here, the only thing I can think of is that it was well worth the wait. I can't really describe the elation that, you know, me and my family experienced when I got that call."

Dawson hit 438 homers with 1,591 RBIs in a career that spanned from 1976-96. Nicknamed "The Hawk," he was voted NL Rookie of the Year in 1977 with Montreal and NL Most Valuable Player in 1987 with the Chicago Cubs, the first member of a last-place team to earn the honor.

"It gave me new life, playing on a natural surface after playing in Montreal on artificial surface for 10 years," he said.

Joined by Barry Bonds and Willie Mays as the only players with 400 home runs and 300 stolen bases, Dawson also played for Boston and Florida. He never made it to the World Series.

"Hopefully, next year will be my time," Blyleven said in an interview on MLB Network.

Alomar received 397 votes (73.7 percent), the most of any first-year candidate who wasn't elected. This marked the first time in BBWAA balloting that two players fell fewer than 10 votes short in one year.

"I feel disappointed, but next year hopefully I make it in," Alomar said at his home in New York, where his son cried. "At least I was close."

Alomar was suspended for five games after spitting on John Hirschbeck in 1996 during an argument following a called third strike, but the two are now fast friends and the umpire was hoping Alomar would be elected.

Cincinnati shortstop Barry Larkin, like Alomar making his first appearance, was on 278 ballots (51.6 percent), followed by reliever Lee Smith at 255 (47.3 percent) and slugger Edgar Martinez at 195 (36.2 percent). Martinez, on the ballot for the first time, is viewed as an early test of how voters will receive players who were primarily designated hitters.

Mark McGwire received 128 votes (23.7 percent), 10 more than last year and matching the total from his first two times on the ballot. Eighth on the career list with 583 homers, he has been stigmatized since evading questions from Congress in 2005 about steroids use.

McGwire was hired in October as St. Louis Cardinals hitting coach and is expected to hold an introductory news conference at some point.

Dawson will be inducted July 25 at Cooperstown along with manager Whitey Herzog and umpire Doug Harvey, elected last month by the Veterans Committee.

A victim of owners' conspiracy against free agents after he left the Expos, Dawson signed a blank contract with the Cubs during spring training. Then-general manager Dallas Green filled in the dollar amount of $500,000, making Dawson the second-lowest paid regular on the team.

Dawson stayed with the Cubs through 1992, then spent two seasons apiece with Boston and Florida. Known for his rifle arm in right field, he had a .279 career average and 314 steals, playing through 12 knee operations.
Posted by psychology at 11:11 PM