The Diamond In The Rough: The Das EFX Session 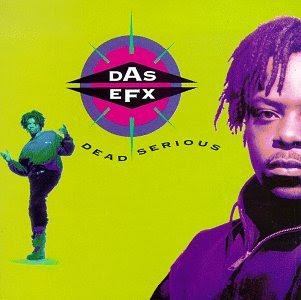 The album was a certified hit, peaking at 16 on the U.S. Billboard 200 chart, topping the Top R&B/Hip-Hop Albums chart for five weeks and reaching platinum sales by 1993. Well-received upon its release, Dead Serious has since been regarded by music writers as a significant and influential album in hip hop.

Dead Serious caused an immediate sensation upon its release in March 1992.[2] The album went platinum on the strength of the singles Mic Checka and the Top 40 pop hit They Want EFX, by 1993.Giving it a 4 out of 5-mic rating, The Source's Matty C compared the duo's lyrical style to that of Busta Rhymes, Treach, and EPMD, writing "Not only have they innovated a new rhyme flow that expands on all these styles, but they have brought back fun filled hip-hop".

Their clever pop culture references were rhymes that have a permanent place in the memories of many Golden Era Hip Hop fans.

In honor of their 20th anniversary, psychology digs in the crates & pays homage to Skoob & Dray with The Diamond In The Rough: The Das EFX Session; premiering tonight ( April 12) on K103 radio at midnight.