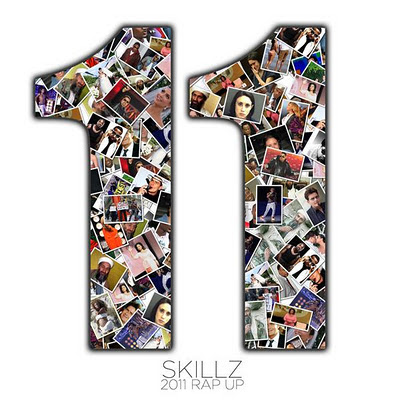 Well excuse me, take a few minutes to mellow out
Your boy Skillz back on the mic to tell about
The year 2011, who else gonna spit it to you?
And since you keep asking, I guess (I’m gonna give it to you)

The year started off with predictions galore
With birds falling out the sky and fish washing ashore
Great! What a way to start the race
Then Gucci Mane gets an ice cream cone tatted on his face
Thinking about a face tat? Reconsider
Ciara got played by Rihanna on twitter
Kim K proved she could hardly sing
And we got caught up in the madness of Charlie Sheen
(Winning!)
If you didn’t hear, Rebecca Black’s best day of the week?
Worst song of the year
And the quake left the coast of Japan in ruins
Y’all watched the royal wedding
Like you actually knew ‘em!
And the government was slacking and causing distractions
Talking about shutting down. I knew that wasn’t gonna happen!
I shout Obama though in sinister fashion
Cause we ended up toe-tagging the boy Bin Laden
But Oprah tho? She went out like a pro
And kept it real classy for her very last show
Got her own network, but that’s moving kinda slow
The moral of the story is “be careful what you ask for”
Anthony Weiner had it rough
Weiner tweeted his weiner, fam I aint making this up!
And the media wins, cause I’d be damned if we
Couldnt take our eyes of Casey Anthony
Innocent? I was sure they caught her
Is it me or that one bad episode of Law & Order
And Schwarzenegger? He need a life teacher
Bruh, you going raw tho? In the housekeeper?
And every girl in the world went crazy
When Beyonce announced she was having her baby
That’s power! But ladies, you can calm down
It’s not like you getting invited to a baby shower!
And Kim K said the wedding wasn’t fake
Her marriage? That was shorter than the East Coast earthquake
And yeah we watched the throne
But Lil Wayne’s jeggings? Man, them pants had a life of they own
A couple twitter beefs got escalated
But the best one was Ray J and Fab in Vegas
They had me laughing out loud
I wonder where Ray is (I’m with the money team)
Protestors got deep, and people went from
Occupying Wall Street to occupying all streets
Technology? Full-blown
Cause if you don’t have an iPhone
Well.. you don’t have an iPhone
RIP to Steve Jobs fasho
Cause that’s how you change the world before you go
Conrad Murray tho? Hit with fines
And found guilty, he gon have to do that time
Herman Cain rocked out and dropped out
The NFL dodged it, but the NBA had a lockout
That threw the season off-course
Damn Kobe! No prenup? Now a divorce?
Vanessa gonna see a lot of cake
So don’t be surprised if Kobe misses every shot he takes
This year was so crazy, and that old lady
Know damn well that Bieber aint fathered her baby
Just cause I wanna do it, for no reason at all
I’mma just throw in a “Maybach Music”
The troops came home and that was great
There’s no humor to be found in
What was done at Penn State
3000 home runs, Jeter’s the dude
And people still getting famous off of Youtube views
The white girl rapping was my choice
But where’s the homeless guy? The one with the radio voice!
Kept winning tho, and you ain’t gotta be a wife
To be on the wife reality show
A lot of death’s this year, was a shame to see
From Amy Winehouse to my man Heavy D
We lost a lot of people to say the least
And they will all be missed, may they rest in peace
Y’all take care of yourselves
And make sure you celebrate life in 2012