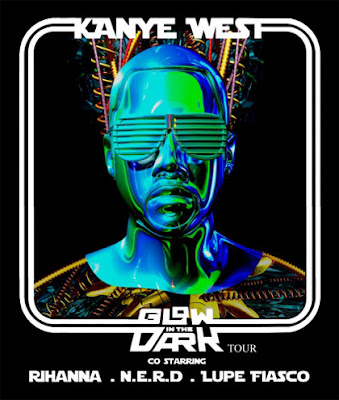 This Tuesday Kanye West's Glow In The Dark Tour comes to Montreal's Bell Centre. It's no secret that I am a fan of Yeezy... and lately the Chicago MC is been dropping some awesome verses with appearances on Young Jeezy's Put On, The Remix of Lollipop by Lil' Wayne & fellow tour mates' N*E*R*D's Everyone Nose Remix.
Although the stop in Montreal will NOT include hometown hero, A-Trak, there is excitement surrounding this show, as this is Kanye's first visit to Montreal and I'm not gonna lie.... I'm excited too!
So here are a few mixes, courtesy of yours truly; psychology, to keep your Kanye fix bearable until Tuesday night:

DITR - The Kanye West Session: The Poet (created & released upon the launch of Late Registration; 2005)

DITR - The Kanye West Session: The Producer (created & released upon the launch of Late Registration; 2005)

and here's the latest/newest video from N*E*R*D for Everyone Nose from their new album, Seeing Sounds hitting stores June 10th: