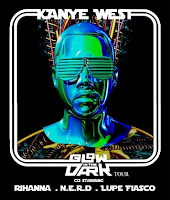 Kanye's Glow In The Dark Tour is almost ready to hit the road. This image and the talent roster showed up on Kanye's Blog not too long ago. Lupe? N.E.R.D? Not to mention the princess of pop, Rihanna... Damn Yeezy. We are just waiting to hear the tour dates..
Yo A-Trak; you better be in Kanye's ear to bring the tour to your hometown, Montreal!!!

In other Kanye news, rumor has it that Kanye WILL be performing at the grammys. An emotional tribute to his Mother, Donda West is planned by Kanye. We'll just have to wait 'til Sunday evening to see..

My question is will there be any mention or tribute to Thriller as Thriller 25 drops Tuesday?
Posted by psychology at 9:28 AM